Our strapline has never been more apt… Without our partners and supporters, 2020 would have become impossible. Our grateful thanks go to: 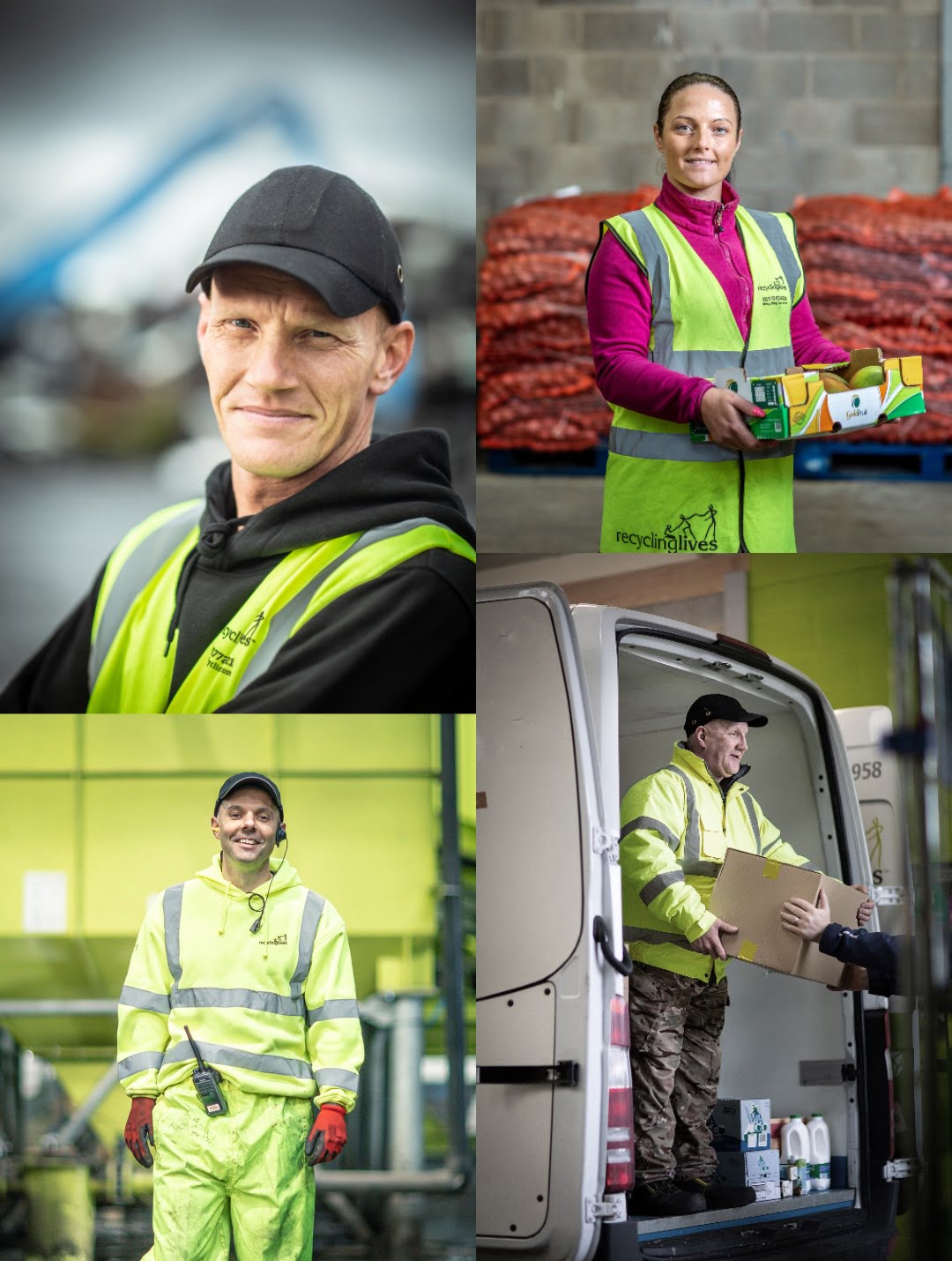 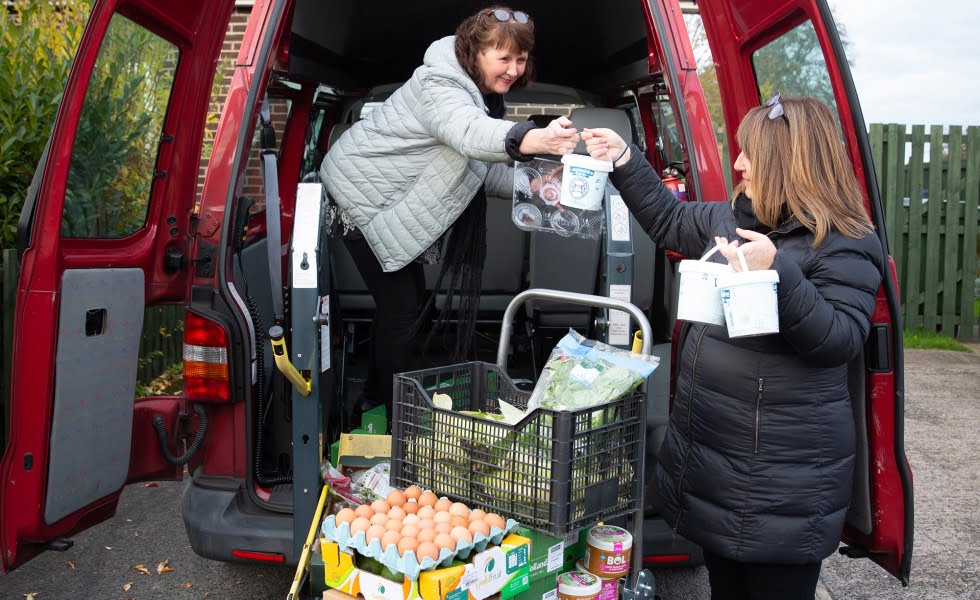 Our biggest year yet

2020 has been a year like no other – not least for our Food Redistribution Centre.

The team have delivered three times more meals to help people hardest hit by the pandemic. Within a matter of weeks of lockdown being imposed in March, we went from delivering 22,000 meals a week to a 70,000. In six months alone (March to October) we delivered 2.3 million meals. That’s 987 tonnes of food diverted from waste and instead feeding people in need.

It’s been a staggering and admirable effort by both our team and the 160+ Community Food Members (CFMs) we supply.

In normal times, the biggest factor in creating need for food is financial – people struggling to make ends meet or groups seeing a surge in demand for services. However, this year there have also been all those isolating or shielding or whose transport links had been compromised who needed extra support just to get the basics in.

“Seeing how everyone has rallied around and responded to this crisis has been incredible,” says Jeff, manager of our Centre. 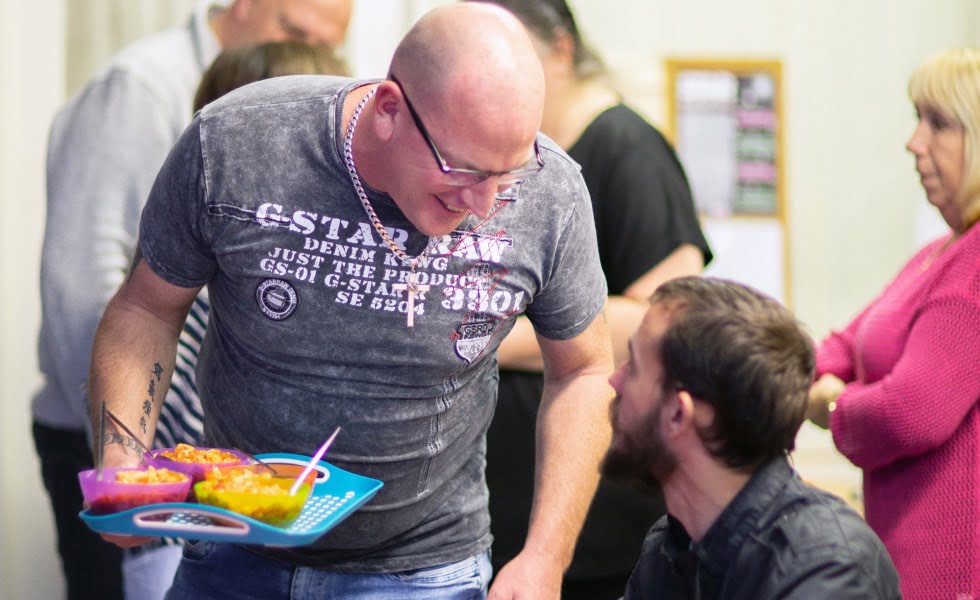 We’ve had a number of new CFMs join us along the way, including schools, churches and grassroots groups rallying to develop solutions for their communities. And many existing members have adapted their provision, moving to ‘social supermarket’ models or home delivery services to ensure no-one went without.

At the same time, our team were also coping with big changes. The way the warehouse worked had to change significantly, to allow for updated health and safety guidance such as social distancing. There were also much higher volumes of food coming in and out and a big change in the food types, changing how and where it was stored. From April, 25 extra pallets arrived every week from the government’s DEFRA, of long-life, dried or ambient goods, like pasta, tins or cereals. We also had lots of goods coming in from the hospitality sector, who’d been forced to close their doors.

“Our volunteers have put in incredible effort and care in extreme circumstances,” says Jeff. “The whole team kept smiling and kept going, while they were also living through all the uncertainty and unease this year has created. They put others before themselves so that we could continue our vital work.” 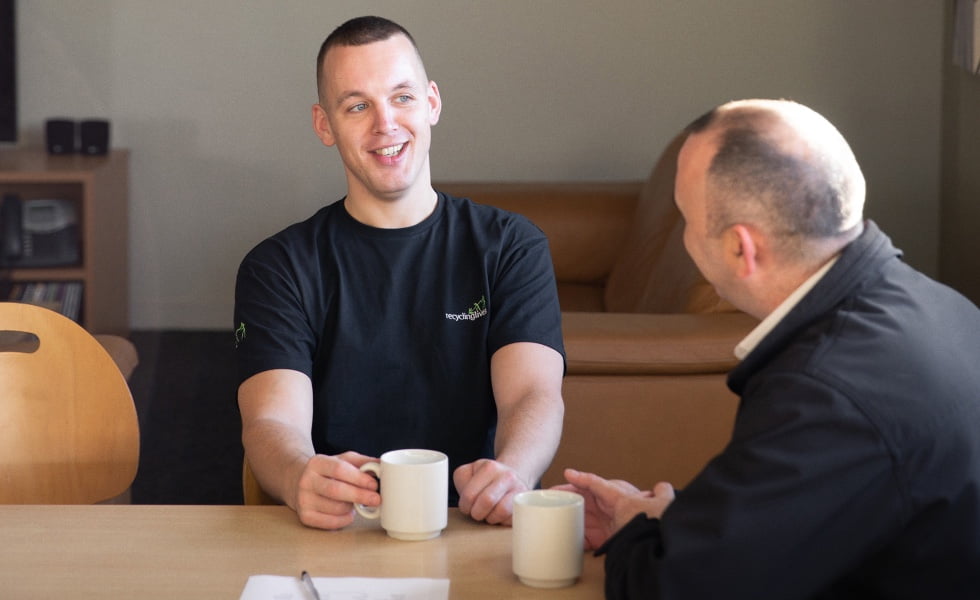 The team have been faced with a number of setbacks, not least with the prisons closing and face-to-face meetings being abruptly halted – both so critical for building trusted relationships with our men and women. Then there has been the challenges in the labour market and coping with job losses, or even job offers being withdrawn, for participants.

In spite of this, we have had another successful year supporting our men and women into positive new lifestyles and ultimately reducing reoffending rates.

Since the beginning of lockdown, we’ve had 80 men and women released from prison, 68% of whom are already in a job. On top of this, we’ve continued to support dozens of people who were released in the weeks, months and even years before lockdown, who needed help again. 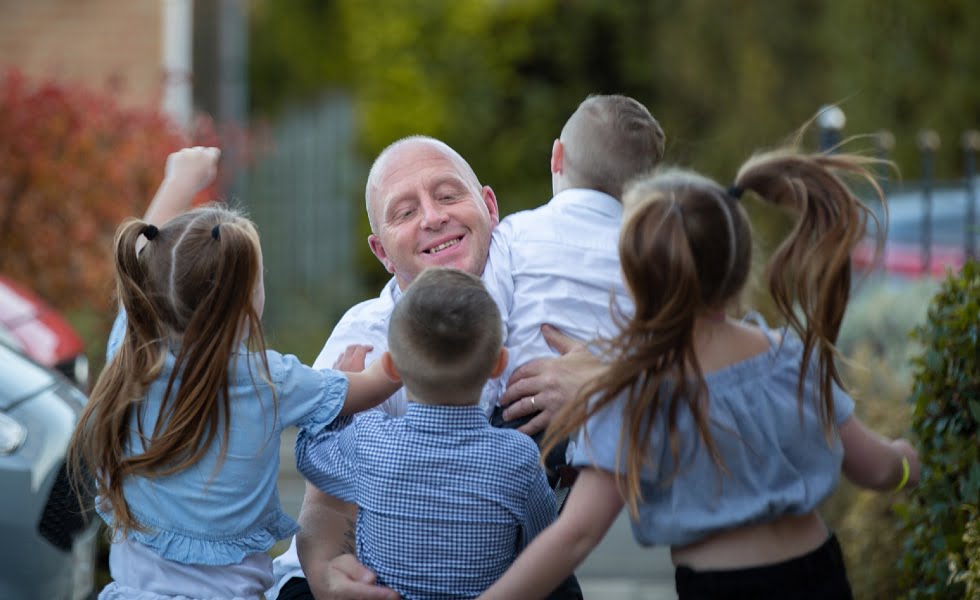 Some of these unfortunately lost their jobs during lockdown so needed additional support to find new opportunities. And as many turned to our team for reassurance and a friendly voice during the uncertainty of lockdown.

The effort that goes into this cannot be overstated – our team work with each individual on everything from confidence-building and skills development to supporting to secure documentation like birth certificates or maintain abstinence or good mental health.

We’ve had to be agile and adapt our model, seeking out partnerships with employers in new industries to secure jobs. At every turn the team have turned challenges into opportunities, such as securing roles with PPE manufacturers or food producers.

And all of this has been achieved over the phone and while working from home.

We put people first here. Our focus is always on the people we support and we love to shout about the impact our work has. What we talk less about is the processes that underpin it… This year the lockdown caused the closure of our eight prison-based workshops, where we usually recycle 75,000 waste electricals every month. This recycling work is integral not just to allowing men and women to develop skills, but allowing us to be financially self-sufficient.

In late June we opened a new community-based workshop in Preston. In its first five months this facility has created opportunities for 15 men and women, who’ve done a stellar job recycling 281,000 waste electricals, including gas meters for British Gas, home hubs for BT and thousands of old TVs.

Happily, we now have six of the eight prison-based workshops reopened, albeit operating at roughly 50% capacity each, in terms of goods processed and people working, due to social distancing guidelines. Unfortunately, this doesn’t quite equate to 50% of usual income but we’re getting there. Luckily we’ve not had to turn anyone away to get back to work as with people 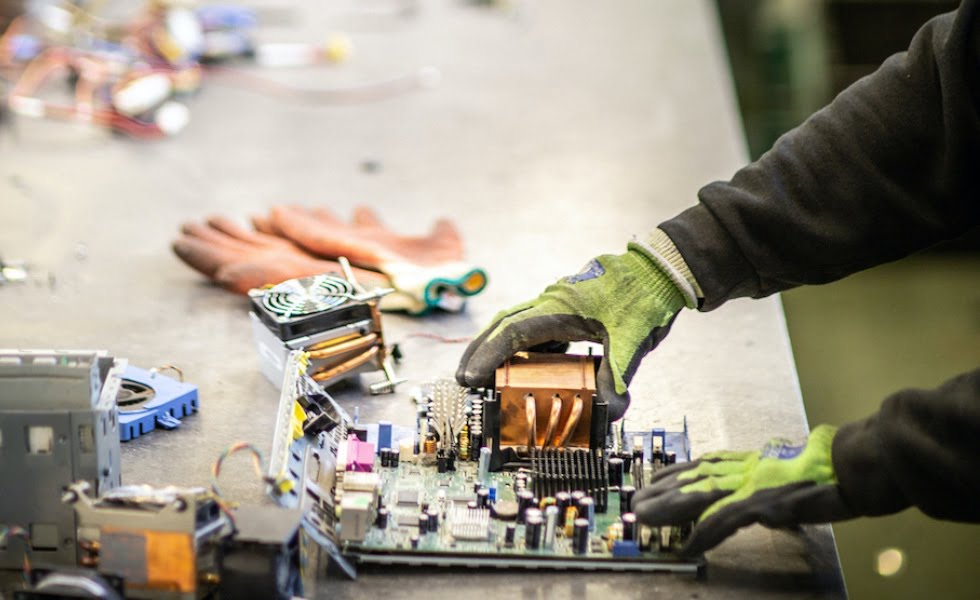 being released from prison in the last six months, numbers of participants had dropped anyway.

To give some context, in November last year, with eight workshops open, engaging between 15-30 people each, 13,500 man-hours work was completed. Last month, we were only able to manage 5,300 man hours.

But, as Tom, our Head of Operations, says: “It doesn’t have to be a massive operation to make a difference to someone’s life.”

And that’s what it’s all about. 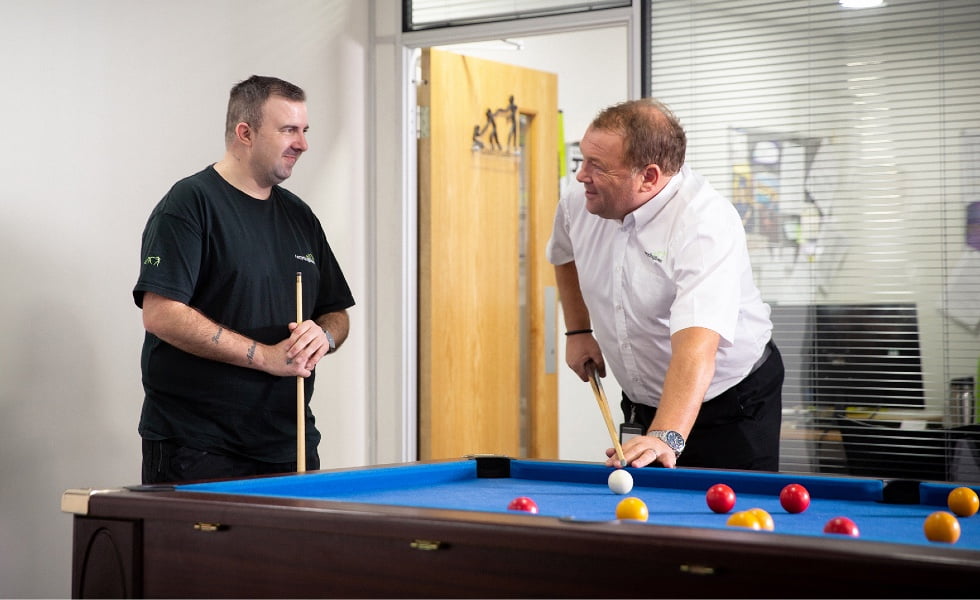 Stay at home. It’s been one of the core messages of 2020 and has given so many of a us a newfound appreciation for our own safe havens.

For the lads living in our residential facility, it came with a unique set of challenges and opportunities. Over the last 12 months, 13 men have been supported, with up to 10 forming the household at any one time.

Given this fact, a real positive is that everyone stayed healthy, sticking to the lockdown rules and keeping one another protected.

“That’s down, in no small part, to how the lads handled lockdown,” says Neil, head of residential. “The lads have been really flexible and, as always, we’ve had fantastic feedback from their work placements.”

The initial lockdown was used to write CVs and complete free online courses to keep busy and focused. Once the world opened up a bit more, the lads played a vital role at the Food Redistribution Centre, volunteering to keep those massive volumes of food flowing. Some then moved into the new community-based recycling workshop, mentioned above, first 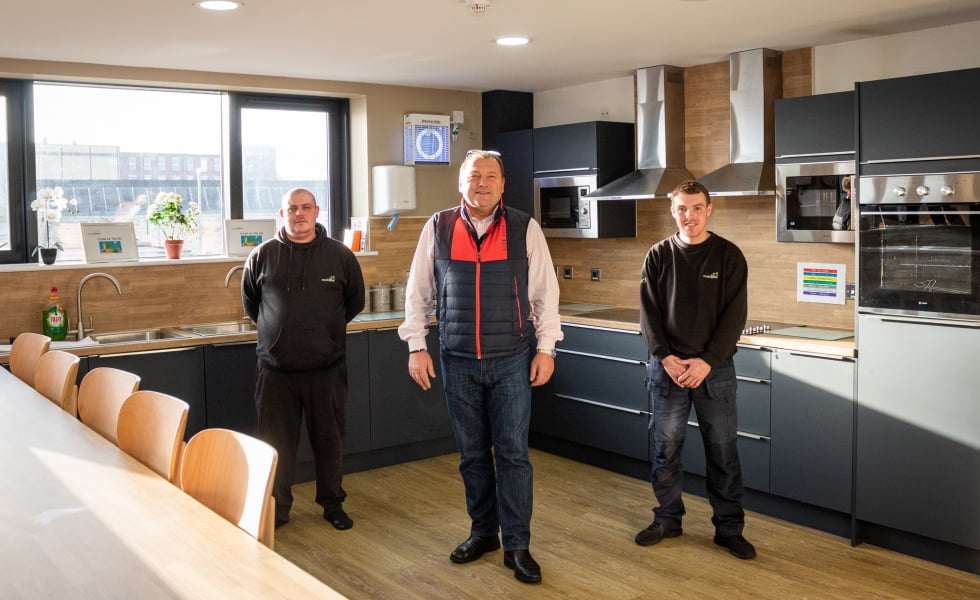 trialling the model and work and then mentoring new starters. Andy is now supervisor in this workshop, working closely with our prison operations team.

Our residents receive a weekly allowance as standard, but the success of the workshop allowed for a new fortnightly bonus, as thanks for the effort put in to making this a success.

As things started to open up more and more, additional opportunities were possible, including Jordan working with a plumbing business and Alex completing a welding course at college. Most recently Steven and Gareth have started placements with United Utilities, hoping to follow in the footsteps of Lee, Clarke, Gary and Jared.

One thing that’s made our residential facility an even nicer place to be has been the addition of a new, high quality kitchen and laundry room. This was donated by Onward Homes, ID Surfaces, Wilsonart, MR Flooring and Whatmores Builders, and all made possible by Jewson Partnership Solutions.

Now, with the new year fast approaching, a number of the lads are looking to their exit strategies, with all seven current residents hoping to be moving on by March. We wish them the very best of luck!

A note from Alasdair...

“There’s a quote I like: ‘Be stubborn with your goal, and flexible with your methods.’
“I think it really encapsulates 2020 for our charity, after perhaps the most turbulent year in our lifetimes. Simply put everything turned upside down.
“Our prison workshops shut and face-to-face meetings with our participants became impossible. Meanwhile, our residential programme became a locked down household like any other and our community cafes closed.
“By contrast, our Food Redistribution Centre became the equivalent of the fourth emergency service, needing to get treble the normal tonnages of goods out.
“Just how does a small organisation, of fewer than 30 people, cope with that?
“Well, by being amazingly adaptive, creative, and flexible… Not ever complaining but working together for the common goal and helping those people who need us most.
“It has been incredibly tough at times. It has stretched people to their limits and occasionally beyond, but each person has stepped up and made sure we have been able to carry on and keep this organisation going and flourishing.
“I also like the phrase ‘Leave no stone unturned’. We haven’t. And I’m proud to share the results with you here.”
Alasdair Jackson, Chief Executive 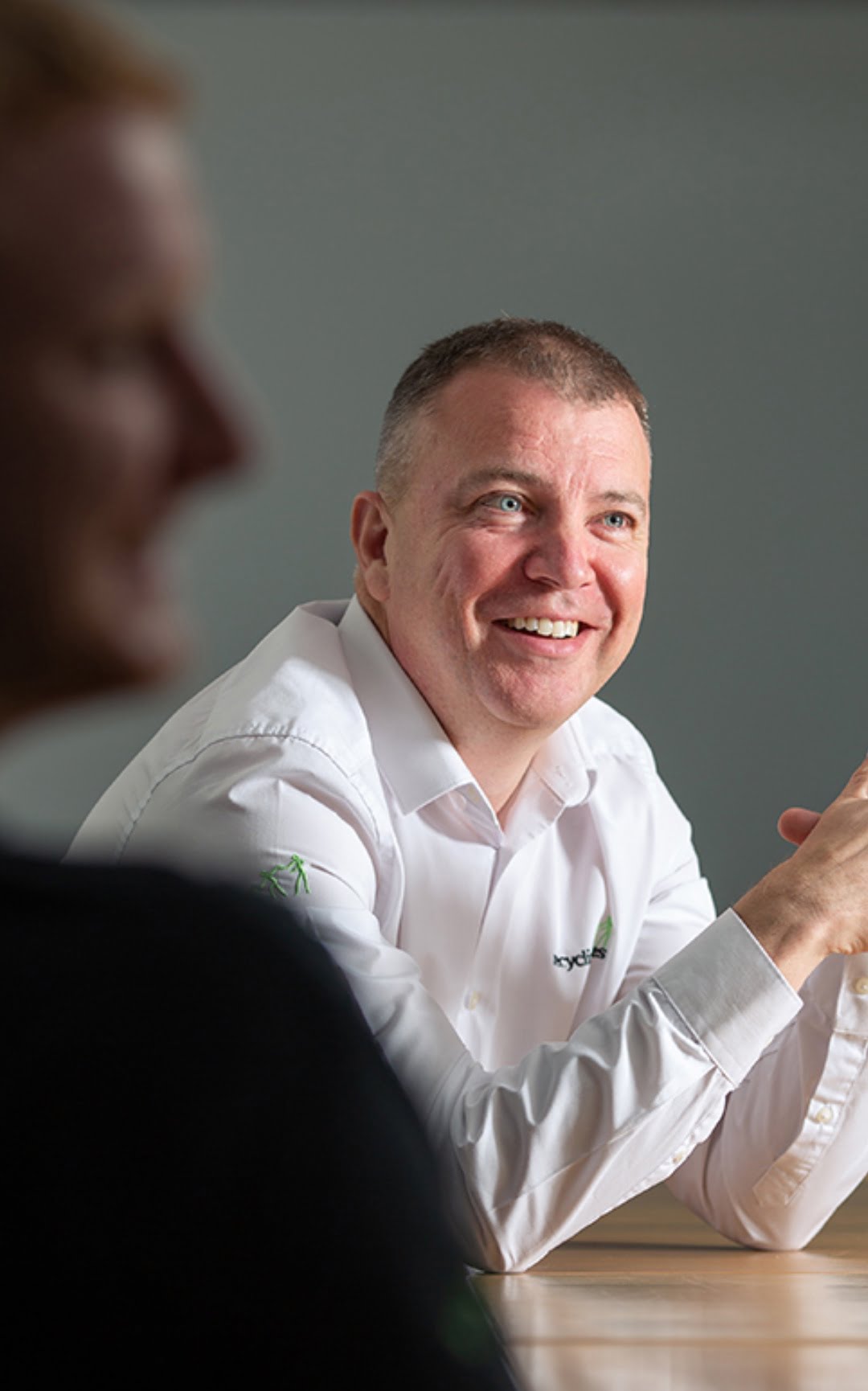